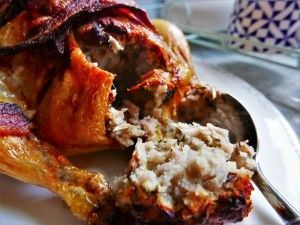 As a child, full of the excitement of Christmas, I was only interested in a couple of bits of Christmas Dinner. Namely – the stuffing, and Mince pies!

Stuffing at home always had sausage meat in it, and we never had ‘Bread Stuffing’. When I moved up to Norn Irn, I embraced bread stuffing with gusto, and have been making it ever since.

However this recipe from my friend Muriel, formerly of the Ormeau Road, but now living within view of the Indian Ocean in Perth, Western Australia, sounded so good that I really had to try it recently. I was not disappointed, as the flavours and texture were wonderful. There are several recipes from Muriel, and her daughter Chloe, on this site, so do check them out.

This recipe is made in a large bowl, and I did all the chopping, mixing etc by hand (I used ready-grated breadcrumbs), but a food processor will make it much easier.

The mix comes together beautifully, and it’s really easy to work with – something that Bread Stuffing can often not be!

This recipe is enough to stuff a Turkey for that big December festival that starts earlier every year. I made the whole recipe, and stuffed a 1.5Kg chicken with it. Naturally, I had quite a lot left over, but it’s in a box in the fridge waiting for its midweek moment of glory when I stuff a few Chicken breasts https://eatingforireland.com/recipe/stuffed-chicken-and-bacon-parcels/  It’s one of my most popular recipes, by the way, in case you’ve missed it until now.. 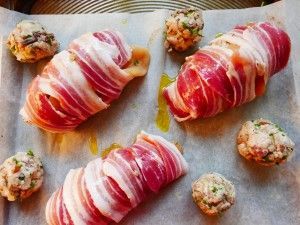 Stuffed Chicken Breasts wrapped in bacon, and the very last of the stuffing made into Croquets which get beautifully crunchy!

I imagine that it will freeze beautifully too, and it’s what I’ll be making this year, and freezing sometime in December – something else I won’t have to think about in the run-up to Christmas Day.. 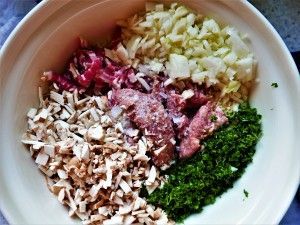 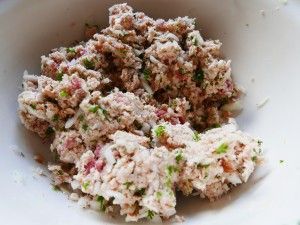