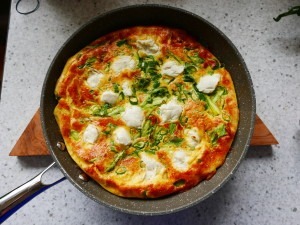 I spotted some Asparagus in the supermarket, and did what I usually do – bought it, intending to eat it for dinner/lunch/whichever meal came first.. and didn’t. Story of my life right there..

This  Asparagus was imported from *rifles through the bin* – Mexico.  I know, I’m a disgrace, but the local Asparagus season is so short that I do occasionally, around this time of year, find myself grabbing a bag which comes from – ahem – slightly further away..

I’ve been waiting patiently for my friend Julie’s Asparagus to be finally ready to eat – it’s a monster to grow yourself; which you’ll know if you’ve ever tried – you’re not allowed to pick it for the first two years after you’ve planted it. Not that Julie was in any danger of eating it before she should, because the local rabbit population developed a taste for it, despite the latent threat of a) an irate Julie, and b) a mini army of dogs whose favourite thing is chasing rabbits. Still, we live in hope, and in the meantime I buy Asparagus from Mexico, until the proper stuff makes an appearance..

This recipe though, this recipe, is beyond delicious, and – get this – takes about 10 minutes from thinking about it, to sitting down to eat it ..

This is a Deb Perelman/Smitten Kitchen recipe; I’ve made a few – not many – changes, and I have to tell you that if you like Asparagus* (see NOTES), and you like Goat’s cheese, you are absolutely going to love this!

This recipe made enough for a lunch for 4 today – assuming that you’re going to serve a salad  and some nice bread with it. Not that there were 4 for lunch, times being what they are at the latter end of 2021.. Of course you can up the ingredients, add more eggs, use a bigger frying pan, to make it feed a few more lucky diners.. 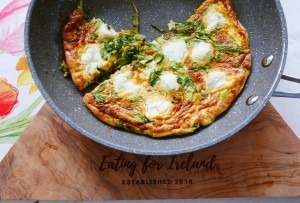 INGREDIENTS: Feeds 4 for lunch, 2 for dinner. 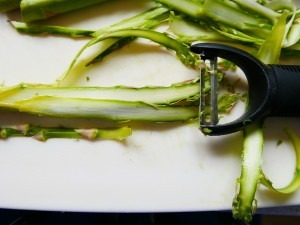 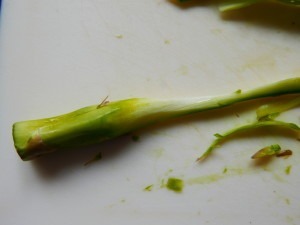 The woody end is very obvious as you shave the Asparagus stem.. 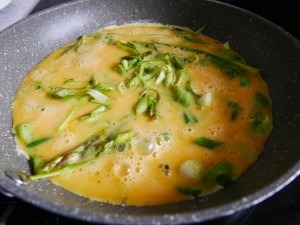 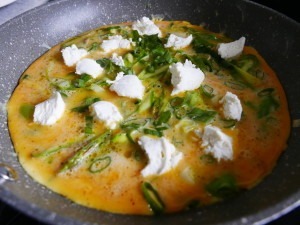 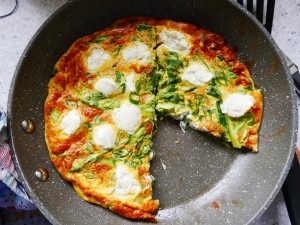 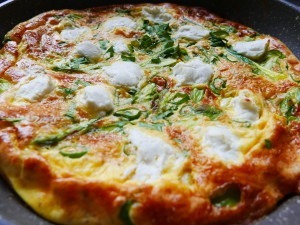 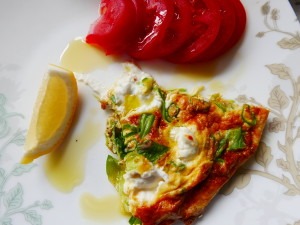