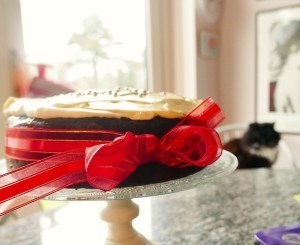 Well there I was, 4 days before Christmas, and despite all my planning and making and baking, I found myself with no Christmas cake – but a quick check of my hand-written Christmas book resulted in the re-discovery of Nigella’s Chocolate Christmas Cake! According to my book, I first made this in 2012, and it’s be come a bit of a Christmas tradition now. I have to say that Nigella’s recipes don’t usually work for me, but this one does.

The great thing about this cake is that it’s so moist and rich that it feels like it’s been maturing forever. It’s also a really easy cake – one that you can make whilst you’re doing other things. To me, the biggest effort you have to make is the lining of the tin (I’ll talk you through that) – this cake gets a reasonably long, low cooking, so it needs to have its edges protected from the heat.

INGREDIENTS: There’s a big long list here, but it’s mostly thrown together so don’t panic, and tick each item off as you add it to the pot.

Into the saucepan put the following:

THEN, separately – don’t put them near the first list just yet.. 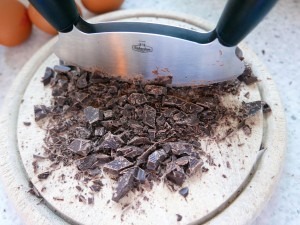 LINING THE TIN: Cutting the bottom of the sheet of baking parchment works for every cake tin you’ll ever have to line, so it’s well worth learning.. 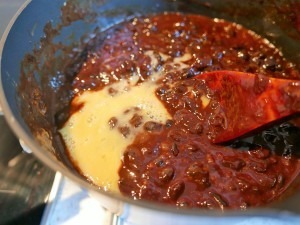 Folding the eggs in.. 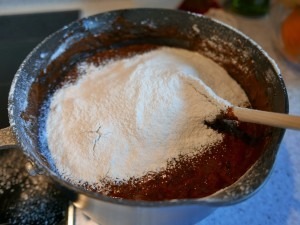 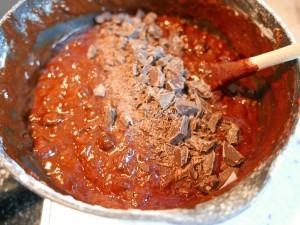 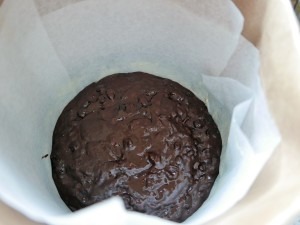 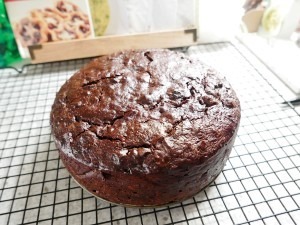 Look at that shine!

You can ice it as soon as it’s fully cold (I find that this takes overnight) – traditionally, with marzipan and royal icing, or with a fondant icing; or with Nigella’s suggestion of Chocolate icing (recipe below) bearing in mind that it will only last about 3 days if you use the chocolate icing. If you’re keeping it for later on, wrap it gently in a double layer of baking parchment and put it into a tin in a cool spot until you’re ready to ice it.

Into a medium sized saucepan put:

Warm everything together gently and when the chocolate has melted and everything is blended together, then whisk it vigorously until it’s thick and glossy. 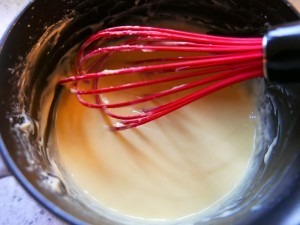 This is me doing it with White Chocolate, obvs..

The first time I did this I was concerned as it seemed to take forever to thicken – the trick is that it really won’t thicken until it’s cooled considerably, so don’t panic, and take your time.. 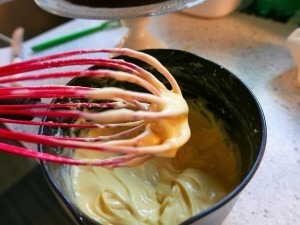 My patience is rewarded!

Pour over the cake and swirl it over the entire top. Then decorate as the mood takes you 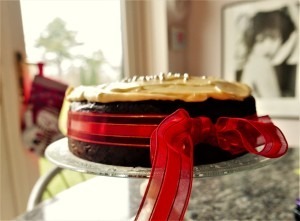 Allow to cool and set, then store covered, in a cool place and use up within three days. It’s such a delicious cake that it rarely lasts more than 3 days anyway!