Home › Recipe › Sloes and Sloe Gin…all you need to know…

Sloes and Sloe Gin…all you need to know…

Posted on December 11, 2015 by admin
print
Our friends Julie and John had a bumper crop of sloe berries this year – they were literally everywhere – and as I was aware that it was nearly time to be making my Sloe Gin again, we helped them clear some from the hedges 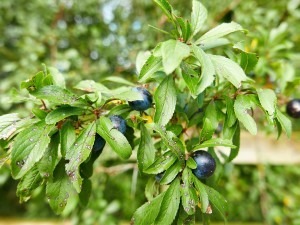 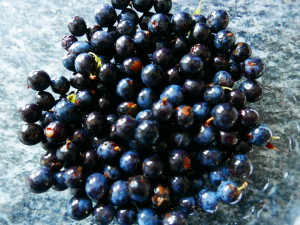 rinsed and frozen, and ready to go

This is my Sloe Gin recipe from 2015, and it works really well..

A quick search of the internet revealed that:

a) Sloes are a member of the plum family, but are very bitter and not edible, and

c) Apparently, it’s the Hawthorn that has the white flowers which produced the sloes. These trees are the ones that provide the wood for the traditional ‘Black-thorn’ walking sticks.

I’ve had a good look around the internet (so you don’t have to) and as always the recipes vary; from people pricking each sloe berry with a pin (I don’t have the personality for that), to my preferred option – freezing them over-night before adding them to the gin. There was also much discussion regarding the addition of sugar. I’m going to follow someone who sounded like he knew what he was talking about, and make a sugar syrup later on to add if it’s needed.

So – here’s the recipe I’m following to make a litre of Sloe Gin: 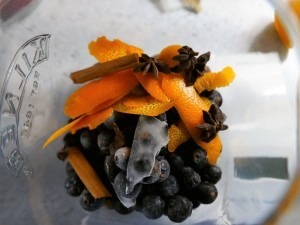 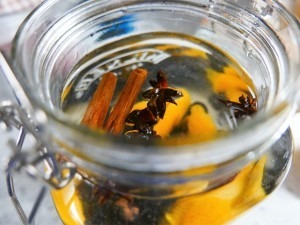 When it’s done it should be a beautiful pink shade, and you need to taste it, (as if you needed to be told, eh??).

If it’s too bitter for your taste, make up a sugar syrup of 1-part caster sugar to 2 parts of water, and bring it to the boil until the sugar has dissolved.

Add sugar syrup until it’s reached your equivalent of perfection.. (I know, all that forced tasting – look, do you want to be a cook or not?)

Strain it well, several times.  I used a fine sieve the first time, and then the sieve with a paper coffee filter in it. The proper cooks amongst you will already have pieces of muslin to hand. The paper coffee filter worked very well, and I’ve used a double sheet of kitchen roll effectively too..

Discard the sloes and flavourings. (I think it’s an awful pity to do this, but there is nothing else you can make from the leftovers)

Then bottle it up in pretty, sterilised bottles (you can either boil them, or put them through the dishwasher, then dry in an oven at 100 degrees for about 15 minutes).