Posted on June 8, 2019 by Becks
print
I had such an interesting time at St George’s market this morning!

Truthfully, it’s always interesting, but today I found myself in a corner that I don’t usually frequent, and there I found what appeared to be the World’s Largest Mushroom (I think it deserves capitals!)

This HALF of the original Puffball – the other half went to a Vegan Fair! 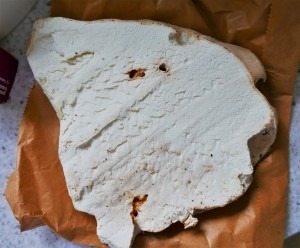 And here’s my slice!

Seamus, who owns the farm where it grew, was selling it in slices. He told me that these Giant Puffballs (Calvatia Gigantea – for those who want to look it up) have been growing on his family’s farm since he was a child. It was only recently that he’d heard that it was edible, so his wife had taken half of it to a Vegan Fair in Derry, while he was selling slices of the other half in Belfast!

Naturally I had to have some, so I bought a slice (vegans use it as pizza base) and nibbled a bit – I was amazed to discover that it tasted  like non-sweet marshmallow! It’s definitely a mushroom though, because you can certainly taste that too.

Off I went, to spend a happy half-hour on the internet finding out all about my Giant Puffball, and some recipes to try..

And that’s how we came to have Giant Puffball Parmigiana with our dinner this evening! 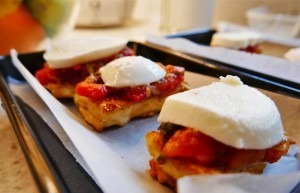 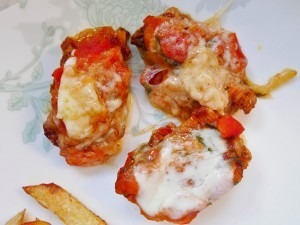 I cooked a few extra little bits, just in the oil/butter mixture, and had them as ‘Cook’s Treats’ while I was making dinner, and they were delicious.

The Parmigiana treatment made me realise why it’s such a popular choice as a vegan Pizza Base – I’m not a huge fan of Pizza, but I’d definitely eat it if the base tasted like this. I’m certainly going to try to get some more of this – my friend Julie said that she thought she has one growing at home – Seamus says they like Nettle patches best!